The action mechanism of PMT is reversible and enhances PCR specificity by complementing the conventional hot start PCR reaction, which is an irreversible Taq activation process.
In conventional hot start PCR through chemical or antibody inhibition, Taq polymerase is activated with the dissociation of the inhibitor in the pre-denaturation step and determines the specificity in the initial PCR stage. This irreversible activation of Taq polymerase can not influence the specificity of Taq polymerase during thermocycling. The action of PMT, however, is reversible and reduces nonspecific amplification by inhibiting Taq polymerase activity and rebinding at low annealing temperatures during the thermocycling process of the PCR reaction. As a result, this temperature dependent-inhibition of PCR enzymes by PMT enables highly specific target amplification. This novel method, developed by NanoHelix, is applied to our special enzymes such as HelixAmp™ Premium-Taq polymerase, Taq-Plus polymerase, Premium-Pfu polymerase and Power-Pfu polymerase. The PMT applied PCR enzymes amplify DNA targets at a broad-range of annealing temperatures while exerting higher sensitivity and specificity than conventional PCR enzymes. 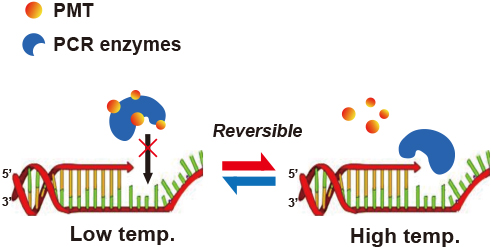 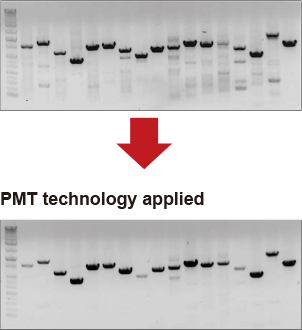